When I started these entries dedicated to the THUNDERBOLT movies offered by IFD, I decided I would check Ninja Thunderbolt to close them just because Ninja Thunderbolt is my favourite among all the Thunderbolt titles for several reasons. Apart from that, Ninja Thunderbolt was the very first ninja movie ever designed by Joseph Lai & the one that caused the ninja invasion from Hong Kong & made IFD a well-known production company around the world video markets. 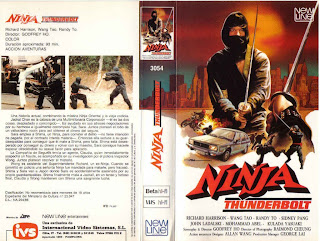 Spanish video art cover. I was bewitched by it the first time I grabbed the movie in my regular video rental shop!
The genesis of Ninja Thunderbolt started when Joseph Lai was in Cannes & he used to visit video rental shops & cinemas to check what audiences like; at the time Menahem Golam's ENTER THE NINJA was being screened and it was a big hit everywhere making Cannon Films & Sho Kosugi extremely popular among martial arts fans. Mr Lai knew he could offer similar products because Hong Kong was the best place to produce action / martial marts movies. Then, he went back to Hong Kong & told director Godfrey Ho they would produce ninja movies. 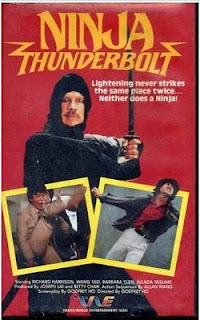 Trans World Entertainment produced some Sho Kosugi movies & distributed many IFD movies in the US.
Enter the ninja was starred by Franco Nero, an actor who was famous for his roles in some of the very best Spaguetti Western ever done in Europe, so Joseph Lai decided to hire another star from european western who was also very popular: Richard Harrison. Hiring spaguetti western actors to play modern day ninjas became into a habit in the industry because just a couple of years later legendary actor Lee Van Cleef was also casted as a ninja in the american TV Series THE MASTER. 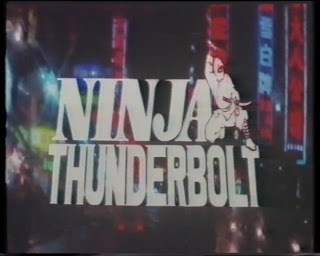 Ninja Thunderbolt & it s source movie To catch a thief stars in an imaginary place that mixes locations from Japan, Taiwan & Hong Kong. Ah, the magic of co-productions!
Ninja Thunderbolt made Richard Harrison would become the most popular icon for IFD till today. In the other hand it also was the cause Richard Harrison decided to quit acting when he felt Lai & Ho cheated him with their working ways. 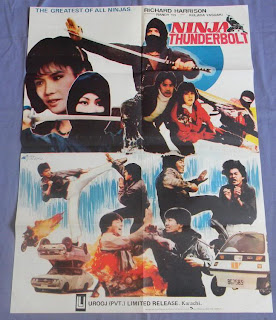 Pakistan art poster for Ninja Thunderbolt
Once Joseph Lai had decided to produce ninja movies, he had Godfrey Ho, Richard Harrison, the ideas but no budget to produce a full movie, then he bought the rights of an asian co-production (Hong Kong-Taiwan- Japan) ninja movie starred by Kurata Yasuaki, Wong Tao and a taiwanese actress named Barbara Yuen and added new fotage directed by Godfrey Ho & with Richard Harrison as the main character. The source movie used was To Catch a Thief ( aka Ninja & the Thief) directed in 1984 by Tommy Lee Gam Ming who had previously directed IMPOSSIBLE WOMAN ( aka Ninja Avenger), another ninja movie in taiwan with Kurata Yasuaki & Elsa Yeung. 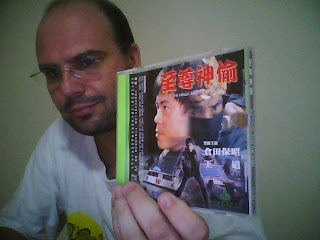 I got my Ocean Shores VCD of To catch a thief (aka Ninja & the thief) during my time in Hong Kong in 2000. At that time when I found out Ocean shores had many source movies used by IFD, I started to hunt all of them down.
To Catch a Thief, as we stated above was a HK-Taiwanese-Japanese co-production & Tommy Lee Gam Ming did a superb work shooting diferent scenes from the different markets & this statement is easily confirmed when we check the different editions of this movie: To catch a thief is an action movie indeed ,but it was also full of sex scenes that were shot/ cut / edited in different ways to avoid censorship.
While the HK VCD of To catch a thief doesn't include even a naked body ( nor male nor female) the international cut used by IFD for Ninja Thunderbolt includes so many sex scenes shown in an almost hardcore porn way where we can appreciate the female naked bodies & even Kurata Yasuakis full frontal naked shots 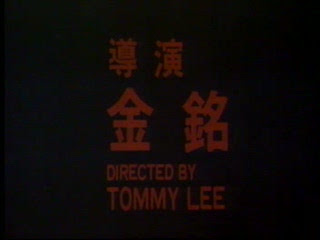 Godfrey Ho??? Tommy Lee???? Both of them are the fathers of Ninja Thunderbolt while Joseph Lai was the stepfather...
The editing work done by Tommy Lee Gam Ming in the original movie & the editing work by IFD was so perfect that many people thought Ninja Thunderbolt wasn't a "cut & paste" IFD movie. The scenes where characters from To catch a thief interact with the ones from the new added shots are so perfectly edited that if we haven't seen an IFD movie before we can truly think they are from the same film. 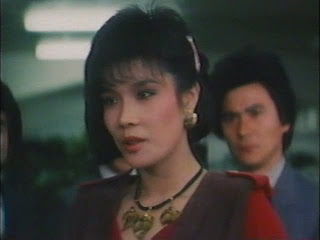 Barbara Yuen (who knows her real chinese name??) was later seen in IFD Ninja Operation 7: Royal Warriors, another asian co-production between Taiwan, South Korea & Thailand.
The international success of Ninja Thunderbolt was so huge as the ninja craze was booming in the world at the same time. Distributors from all around the world started to demand more ninja movies to IFD that was offering what the audiences wanted to see but a cheaper prices. Ninja Thunderbolt supposed the golden goose to IFD.

Original trailer for Ninja thunderbolt
But once again, the Curse of Thunderbolt saga appears because Ninja Thunderbolt may surely be the most famous & popular IFD ninja movie but as it happens to Inferno Thunderbolt, Majestic thunderbolt & Scorpion Thunderbolt, this film doesn't longer exists on IFD catalog. Its master is missing or destroyed & only the remaining old videotapes are the only traces of this classic movie from IFD.
Publicado por Jesus Manuel en 11:01