We finished 2012 with an entry about Taiwan Black Movies at IFD & Filmark, and we open 2013 with the same topic: The gangster movies produced in Taiwan during the late 70's & distributed worldwide under several and different titles by Tomas Tang & Joseph Lai. 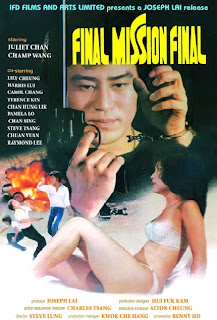 It is curious many of those movies are not longer on IFD catalog, maybe dued to copyright issues or whatever reasons that only IFD people know. It is also curious that the only source/ way to enjoy these movies are the ones released by IFD & Filmark since many of the original films negatives were destroyed after their commercial lifes on theatres. 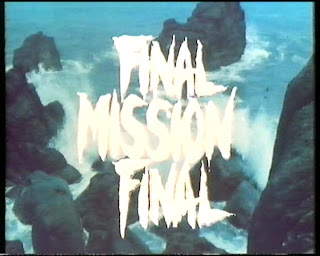 Final Mission Final is an exception. This gangster movie is still on IFD catalog on its original taiwanese cut but dubbed into English like most of IFD movies since it was edited for the international markets.
As usual, the edited version of Final Mission Final was released in Spain during the video boom at the middle 80's. The first released  used the original IFD artcover where we see Champ Wang holding a big gun plus some fights scenes around. 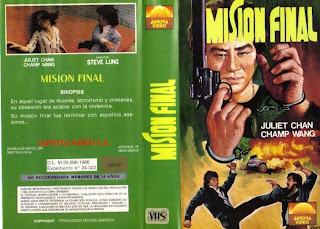 The movie should have been a video hit because years later Final Mission Final was again released on tape in Spain holding the same title but a different artcover that tried to cheat the audience. The cast and other details of this taiwanese production were erased from the front cover. 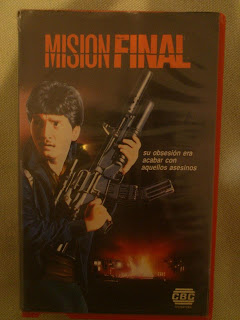 Instead of Champ Wang, the designer used a pic of a filipino actor from other IFD movie holding a heavy machine gun plus some background fire blasts. Indeed, they tried to sell us a Rambo-look-a-like movie instead of a taiwanese crime drama.

But, if Final Mission Final is a relatively easy to find black taiwanese movie since it still is on IFD catalog and was widely distributed, there are some dark points around it that makes this movie interesting for this blog & myself.
First of all is its original taiwanese title. I haven't been able to find it out. Recently I got an original taiwanese cut of this film on widescreen that includes chinese & english credits of the stars & staff but it starts after the original title has passed.

So, on its first frame we see the chinese name of Champ Wang & Juliet Chan ( aka Lyon Chan when she was credited by Filmark).

The we can check the producer of this movie wasn't Joseph Lai but Yen Wu Tung. , a guy who produce a good bunch of all kind of nice & well-known movies

And eventually, the director Hsu Yu Lung (aka Tsui Yuk Lung or Chui Yuk Lung) who was always credited by IFD as Steve Lung in all his works released by IFD.

Then finally...my own confussion trying to identify the real title of this film. I mean, I am trying my best to identify the original title of this movie but as I said above I haven't been successful yet. But  Final Mission Final is credited on HKMDB as an aka title for Who Knows About Me, the movie I identified as main source for IFD GUNS TO HEAVEN.
Right now, I don't know what to think about this film, but I would bet my neck Who knows about me is not Final Mission Final but Gun to Heavens. There are some snapshots that are exactly the same. So, the artcovers were wrong & used pics from other movies or I am totally nuts ( there are countless probabilities of this...anyway).
Publicado por Jesus Manuel en 12:16 2 comentarios: Enlaces a esta entrada