This blog was born just in order to give some credit to the movies produced & distributed by IFD / Filmark, Godfrey Ho, Joseph Lai & Tomas Tang among others. I was tired of reading & listening these movies were the "bottom of the barrell", "the worst  films ever" and similar expressions said by people who generally don't know how those movies were done or by people who watch Ninja Terminator looking for Arnie....said in a different way, we can't watch 55 days in Pekin expecting to see a Wong Fei Hung movie...so, we can't see an IFD ninja movie expecting to see a  ninja movie like American ninja saga or anything related to classic Ninjitsu or a classic japanese ninja films. Once this premise if fully understood & digested IFD & Filmark movies are nice cinematic experiences of exploit cinema since they contains all the ingredients for a perfect "ninja salad": ninjas, kung fu, erotic scenes, stolen music, asian actors from different countries, a very exotic if not a lost film from the southeast asia,etc etc..


This is in my opinion the first & most importat fact why IFD & Filmark films are so unfamous but there is a second reason. Because of the video boom most of those films were edited to be seen on TV, so the different releases were edited on horrible FULLSCREEN and that effect makes the movie less dynamic, we lose a lot of details & in many ways it is not confortable to see a film on that format.

To prove what I said above, I would like you to check what David Pinnegar nicely reccomended in his nice message: A WIDESCREEN VERSION of the very best ninja movie ever produced by IFD Ninja Operation: Knight & Warrior ( aka Silent Assassin). This film deserves to be watched on its widescreen format to apreciate that peope at IFD knew their duties.

This video has been possible thanks to RockoMylers from Youtube & on his own words:

Special thanks to Emperor Ing for supplying me with the English audio source for this video; without him this wouldn't have been possible. Yes, it's the film restoration that the entire world has been waiting for: a complete version of Godfrey Ho's Ninja: Operation Knight and Warrior a.k.a. Ninja: Silent Assassin in its original 2:35:1 aspect ratio(or as close to it will probably ever be). This little piece of video wizardry was pulled off by combining the audio from a (relatively)high quality encode of the pan-and-scanned VHS of Ninja: Silent Assassin- the American version of Ninja: Operation Knight and Warrior- with the more complete image from the French VHS release of the film which was titled Black Ninja(no relation whatsoever to the 2003 direct-to-video Clayton Prince film of the same name). Surprisingly, putting this together required much more than simply overlaying the English audio over the French video and doing a bit of color correction, because the latter not only runs at the PAL standard of 25 FPS but also uses a markedly different print as its source than does the American tape.The differences generally amount to a matter of frames at reel changes which were easily fixed by repeating or cutting a few frames as needed, but on some occasions there are a few seconds of material that are outright missing from the French print andon those occasions I had no choice but to default to the pan-and-scanned American VHS. Thankfully, those occurences are few and far inbetween, but they DO happen so keep that in mind. Also, there are some issues with this version that slipped by me when I was editing this in Vegas- rest assured that those will be ironed out as much as possible by the time I upload this to a file host. In any case, enjoy your partially-restored audio-visual trainwreck.
Publicado por Jesus Manuel en 13:12 1 comentario:

I truly think it is an almost impossible mission to compile a completa IFD catalog since many of the movies they released and/ or distributed dissapeared from it for no obvious reasons. And most of those "gone" films are /were Taiwanese productions on their original cut  and even some cut and paste versions of those movies. Deadly Silver Angels is one of those missing titles from IFD catalogs. It is a strange case since it is an easy to find movie on tape in many countries but is not longer on IFD hands... 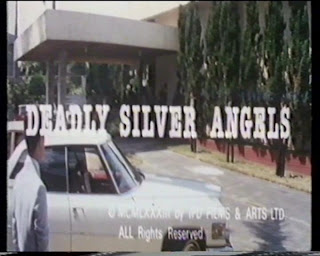 As many early IFD films of Taiwanese Black Movies , Deadly Silver Angels was released in Spain twice by different companies during the VHS craze. The Spanish title was Angeles De Plata Mortales what is simply a word by word translation from the international English title.

While IFD credits shows Deadly Silver Angels as a 1983 production, the fact is this film was shot in 1981 and its original taiwanese title was  VIRAGO ( Strong of a Woman). At first sight we may think IFD offered us this movie on its original taiwanese cut as it was usual back then when IFD just distributed asian films overseas outside Asia.
But there is something weird with Deadly Silver Angels that makes me think IFD started its "cut & paste" editing style before Richard Harrison arrived. The prologue shows a bizarre nightclub scene where a couple dances until they get naked...well, the girl gets totally naked while the guy ( thanks God!!!) keeps his white cottom pants on.
This scene, obviously, has nothing to do with the movie starring by Elsa Yeung & Eagle Lee about gang fights & female revenge, besides the original Taiwanese cut opens with Eagle Lee singing in a nightclub. But the most bizarre fact is the same naked dancing scene was used again by IFD in Angels With Golden Guns ( aka Virgin Apocalypse), a Hong Kong-Thai co-production released by IFD the same year they released Deadly Silver Angels.

Was editor Vincent Leung Wing Chan too busy editing several IFD movies at the same time & got confussed? Was this scene so important to IFD guys that they wanted to use it so many times as possible? I don't have answers to these questions but this scene set the strange, whacky & weird sense of eroticism displayed by IFD on following films.


But that's not all...Deadly Silver Angels got a kind of pseudo-sequel / remake titled on its Hong Kong VCD Scape at Dawn, starred by Taiwanese action star Yin Su Li ( Barbara Yuen when credited by IFD). For a time, I thought this "Deadly Silver Angels 2" was an alternative title for Armed School Girls.

But doing a deeper research on the cast & their "links" to other IFD productions I recently found out that Scape at Dawn is just an alternative title of Escape of the Female Prisoner directed in 1984 by  Lam Ying whose Survival of the Dragon was also released by IFD in the West.

Ninja Dragon is possible one of the most well-known IFD ninja movies because of its many releases on different formats & even today is an easy to find film. Ninja Dragon was possibly shot back to back to some other IFD ninja films such as Ninja Terminator, Ninja The Protector & Diamond Ninja Force. All of these movies share almost the same supporting actors, crews & even locations.

Ninja Dragon tells the story of two Shanghai international tycoons played by Richard Harrison as the hero & Paulo Tocha ( credited as Bruce Stallion) as the villain. A couple of years later ( Ninja Dragon  was shot in 1985) Tocha would become very popular as the evil kickboxer Paco in Jean Claude Van Damme's classic Bloodsport.


Ninja Dragon was choreographed by Donald Kong ( aka Chiang Tao) who played different roles at IFD around those years before he move to Filmark where he used to be credited as Don Kong, Tony Kong or Whatever Kong. He did a nice job on Ninja Dragon: the film opens like a classic kung fu film showing different ninja weapons & then we have a red background where two ninjas display their skills. This kind of opening was very popular on many kung films at the end of the 70's...even Jackie Chan's Snake in the Eagle's shadow used this kind of opening.

In the other hand we have a Taiwanese crime drama played by well known players such as  Lily Lan Yu Li who played  Madam Phoenix in Jackie Chan's Killer Meteors & also some other Taiwan Black movies distributed by IFD such as Fury of a Virgin among others & Chan Kuo- Chu who also played along Jackie Chan & Jimmy Wang Yu in Island on Fire. 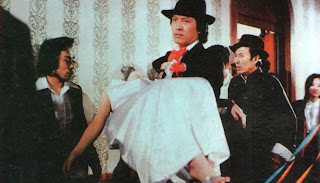 Ninja Dragon was done using a 1982 taiwanese production titled Dark Trap directed by Lee Wing-Cheung who among other works he directed Cat 3 cult films such as Rape & Die or Dress off for life. But the most interesting thing about DARK TRAP is that this taiwanese black movie is just a remake ( well, let's say a Xerox copy suits better) of a Shaw Bros film directed in 1976 by Hua Shan titled Brotherhood. Lee Wing-Cheung worked as assistant director in Brotherhood & then in 1982 he decided to remake it using some of the original cast from Brotherhood!!!. 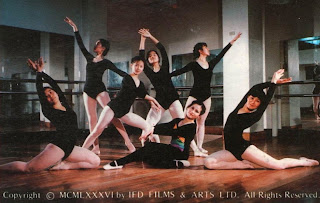 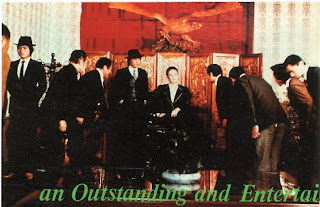 On January 19th 2011, I did an entry writen in Spanish in this blog about Ninja Dragon & Shaw Bros Brotherhood. At the time I had noticed both films had the same story & even same actors.You may see that entry clicking HERE. Back then I didn't know the title of the source movie used by IFD for Ninja Dragon. Today, and Thanks to Teddy Wong from HKMDB, another IFD mistery has been unclosed! As always on these entries, a question, an important question is needed: Does anyone know if Dark Trap was released on tape or is on VCD? Does anyone own a copy of it? Any kind of information about it will be highly appreciated!
Publicado por Jesus Manuel en 19:11 6 comentarios: