Once Upon a Time a KING OF SERPENT part 2

Once NinjaDixon showed me the original taiwanese movie used for IFD's Thunder of gigantic Serpent, I couldn't avoid to search for more information about King of Snake & this is what I found: A wonderful website dedicated to rare & weird films from all around the world.

Here I copy & paste what its author reviewed. Anyway I highly recommend to visit www.wtf-film.com for more details such as the technician info of KING OF SERPENT.

Once Upon a Time a KING OF SNAKE part 1

I have no enough words to THANK & APPRECIATE Fred aka NINJADIXON for his wonderful tip & the original poster of KING OF SNAKE, the original taiwanese movie used by IFD to create THUNDERING OF GIGANTIC SERPENT, one of the most popular & at the same time underrated movies starred by Edowan Bersma as the villanous Solomon & the gone Mr Pierre Kirby as the hero. 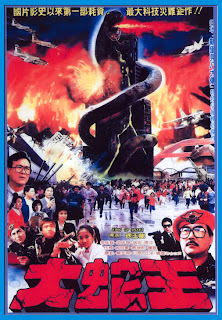 The original taiwanese poster courtesy of NinjaDixon
Joseph Lai's IFD movies always tried to make happy all kind of audiences so they offered War movies, kung fu flicks, ninja epics, animation feautures & of course Kaiju movies. First, Scorpion Thunderbolt came & it was one of the most famous & appreciated Richard Harrison's movies at IFD by fandom,then Thunder of Gigantic serpent arrived and Pierre Kirby became into a cult actor from IFD as it happened to Harrison & others like Mike Abbott, Stuart Smith or Jonathan Isgar. 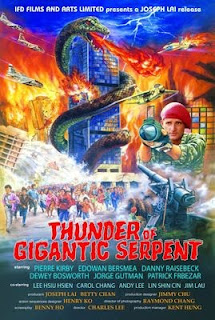 IFD poster keeps the original one's flavour & added Kirby
A lot of webs, blogs & fan sites have dedicated entries, homages, reviews & all kind of information about Thunder of Gigantic Serpent, Edowan Bersma & Pierre Kirby but as always there was something missing & that was the original taiwanese movie used to create this IFD movie.
Now, thanks to Ninjadixon, the secret has been solved. 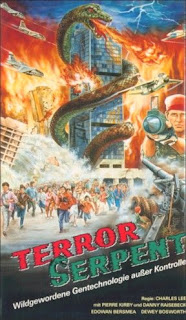 As it happens to many IFD productions, this movie also got several international titles

As we stated in the previous entry, Ninja Operation 7: Royal Warriors was the last ninja movie ever played by Richard Harrison on IFD & the first one for Mike Abbott who had already made his debut in Hitman the Cobra. 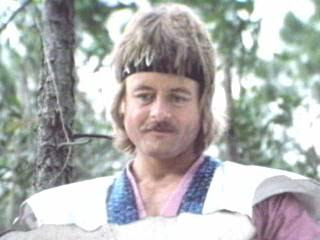 Mike Abbott's clothes were previously used 2 weeks before in the set of Hitman the Cobra
Ninja operation 7: Royal Warriors is a great adventure motion picture. It is like an Indiana Jones movie for adults, containing as we stated ninjas, nude girls, amazing stunts, gratuitious sex, witches..etc. But all this elements were not brought to us by Godfrey Ho...not in a direct way, I mean. 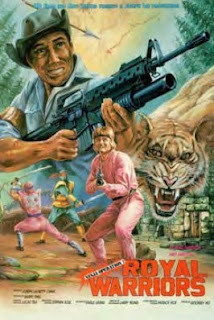 In some Asian art covers, Richard Harrison's face was changed by thai superstar Sorapong Chatri's
Ninja Operation 7: Royal Warriors was made using a korean-taiwanese-thai coproduction movie titled THE GREAT SCAPE IN JUNGLE (Millim-ui daetalchul), directed in 1985 in Thailand by korean director Kim Jong-seong who was a veteran directing martial arts & action movies in his own country. In fact, The great scape in Jungle was his last directing job before he changed his duties to planner & producer. 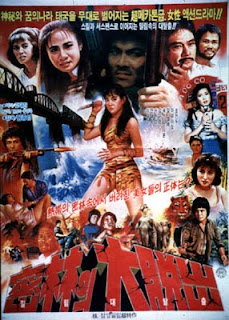 Original korean poster for the source movie used in Ninja Operation 7: Royal Warriors
Joseph Lai might think this movie really worths a view & he released & distributed it everywhere. It can be told Ninja Operation 7: Royal Warriors is one of IFD movie that has enjoyed a wider world distribution since it could be found in countless versions & languages. Just taking a look to the several titles it was edited. 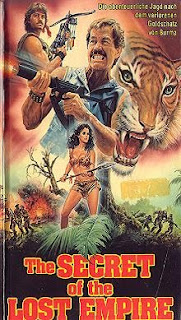 It doesn't matter which country bought the rights of Ninja Operation 7: Royal Warriors. Their art covers always included Abbott, Tarzan's sister & the wild tiger!!!!
Many art covers, with Harrison or Abbott in tough poses & many different titles were shown on video rental shelves. Ninja Operation 7: Royal Warriors helped to create that urban legend about Joseph Lai & Godfrey Ho made dozens of hundreds ninja movies when the reality was quite simple: their movies got world wide distribution that could compete with giants like Golden Harvest or Shaw Bros...if not even bigger since IFD copyright were easier & cheaper to get than the others. 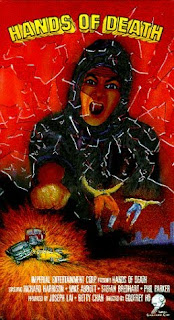 In USA, they never paid attention to the jungle, Tarzan's sister or the wild tiger...not even to Mr Harrison or Mr abbott. A very "sad" art cover that doesn't make justice to Ninja operation 7: Royal Warriors
Whoever wishes to spend 87 minutes of pure fantasy, great action scenes, ninjas & girls should get Ninja Operation 7:Royal Warriors. This IFD movie was released as Hands of death ( not to be confused with John Woo's directorial debut) in USA , The Secret of the lost empire in many other territories or even just Royal Warriors like that superb movie from D&B films starred by Michelle Yeoh that, what a coincidence!!!, was also produced in 1986/87 like this one from IFD.
Another clip from one of the funniest & most enjoyable IFD adventure movies!
Publicado por Jesus Manuel en 10:40 No hay comentarios:

Dear friends & visitors, lately I am not having the best time in Spain dued to the lack of work chances & a very ( really) bad economic situation is almost killing me in a slient way. That's why I haven't been posting too much lately. Thanks to the comments I getting in the blog & also some supporting mails, I have decided to spend some spare time in front of the computer & update a bit. At least I can avoid myself for a while from the reality around me. 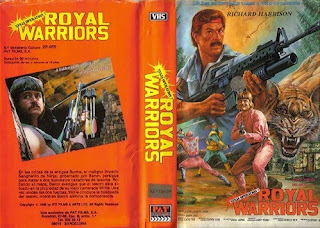 One of the first IFD movies I watched during my earlier teen years was Ninja Operation 7: Royal Warriors. At the time, I had already watched the Golden ninja warrior related movies but this one was the first where I saw the ninjas wearing the (in)famous Ninja headbands that became a trademark for IFD ninja productions. It was also the first time I met Mike Abbott on screen & he automatically became one of my idols.

There is something in Ninja Operation 7: Royal Warriors that gave this movie a special flavour. We found 2 of the biggest IFD stars ( with the permission of Mr Jonathan Isgar) on main roles for the new added shots but we also found the source movie full of big stars from several asian countries whom we had previously met in other IFD productions, so Ninja Operation 7: Royal Warriors not only casted Richard Harrison & Mike Abbott but it also includes Thai superstar Sorapong Chatri who was a regular face at IFD source movies, Korean actor Jack Lam who had starred Ninja Terminator & Taiwanese actress Barbara Yuen who was the female leader in Ninja Thunderbolt. An all star cast for the last ninja movie Richard Harrison played for IFD & the first ninja movie ever starred by Mike Abbott. 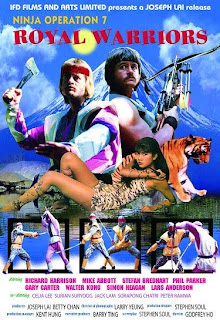 IFD new pressbook also contains fascinating images to convince international video buyers: Mike Abbott in diferent but angrily outfits, Tarzan's sister in an erotic pose, the wild tiger again as well as the ninjas fighting.
The story was also amazing: A group of ninja pirates led by vicious Mike Abbott was searching for a lost treasure while righteous ninja commando tries to stop them. In between, we can find several group of people who are also searching for the treasure, girls trying to scape from a jungle prostitution ring (!!!!)& they still have time to a naked bath in a lake , a thai clon from Indiana Jones played by Sorapong Chatri, Tarzan's sister (!!!!!!!!!!!!!) whose mother is an old witch (!!!!!!!!!!!!!!!!!) & a jungle full of picnic tables.
Besides, the ninja pirate group drinks Coke while they prepare their evil plans & wears on pink colours. As we know pink colour is the best camouflage in jungle.

The very first ten minutes of this IFD Gem.
All these elements made me to have one of the greatest cinematic experiences in my life & even today the movie is totally enjoyable. I truly think this movie is simply great. Totally serious, it is not that kind of " it-is-so-bad-it-is-good" films...Ninja Operation 7: Royal Warriors is a perfect movie to evade you from reality for 87 minutes.
More info about Ninja Operation 7: Royal Warriors to come very soon!
Publicado por Jesus Manuel en 11:26 No hay comentarios: