Would you like to own your own Golden Ninja Warrior Statuette?

IFD offered us many sagas during the years Joseph Lai & his partners produced countless movies. The most remembered ones are the Thunderbolt saga & the Golden ninja warrior saga. While the first one has gained some respect because Godfrey Ho put more attention in the final product, the second one is the most known, beloved & hated by moviegoers. I remember my first IFD movie was Diamond Ninja Force of which title credits showed the Golden Ninja Warrior statuette as if it was another character in the movie, and it was indeed!. 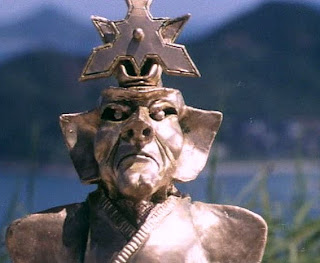 The Golden ninja Warrior warrior statuette was presented to us for first time in Ninja Terminator where we were told about its powers. This same premise was also the line to follow in Diamond ninja force. I have to say I "fell in love" with such statuette from the first moment I saw it in Diamond ninja force & then in Ninja Terminator, Golden ninja warrior & The ultimate ninja. 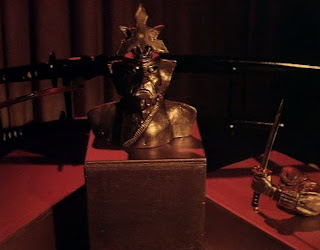 Yes, the Golden ninja warrior statuette was a nice prop to collectors...well, a nice prop to be collected by movie freaks like me. Something like that must be thought by the people at http://www.standingstonestudios.com/ . I must admit I got shocked when I have found this site & the work they develope. But the real surprise has come from
http://www.flickr.com/photos/stuartyork/ where you can find the pics below & many more. 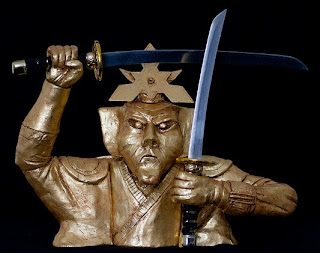 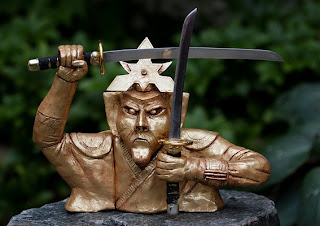 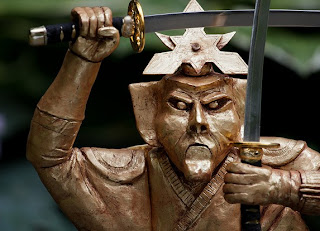 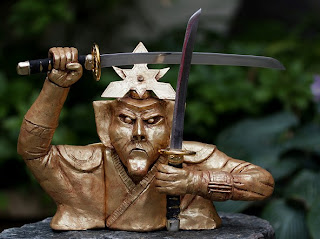 I am very sure Joseph Lai & people behind Golden ninja warrior movies never imagine their statuette would become into a cult prop 25 years after its presentation. 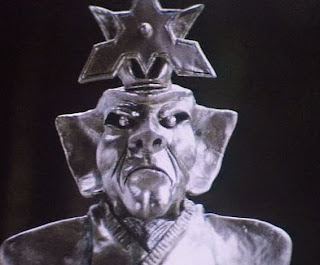 People may think IFD / Filmark are the bottom of the barrel movies because they haven't seen too many of them or the ones they have watched surely have not satisfied their expectations. Watching an IFD movie expecting to find real ninjitsu or even real ninjas is like watching 55 days at Pekin expecting to see another Wong Fei Hung adventure. But what we can't deny is IFD movies had influences in some other movies & even beyond cinema. You don't believe me?

One of the very best cinema magazines in the world is the japanese EIGA HIHO ( Movie Treasures), a magazine that studies Hollywood mainstreams & real junk in equal level. On its 5 issue of 2009, they published a list of cinema monsters that we have found in countless films, from Godzilla & his fellas to the most bizarre ones and among them, we found the snake monster from Scorpion Thunderbolt. 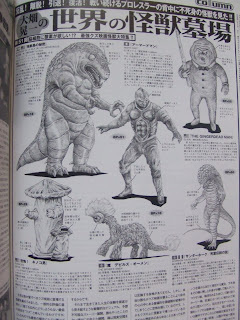 The pic of the monster was completed with some information about the movie it belongs, which company labelled the movie in Japan and some info about Godfrey Ho, but it also includes a mistake since the author considers Scorpion Thunderbolt a co-production among Hong Kong & France ( or Italy?) when ,in fact, it is a korean- taiwanese co-production. 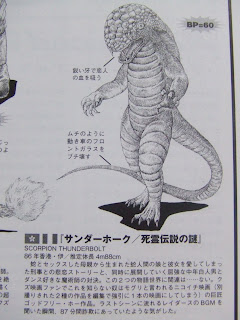 Based on the author's words the serpent monster from Scorpion Thunderbolt is 4m 88cm tall!

THANKS TO ZENI for sending me these scans!
Publicado por Jesus Manuel en 9:33 No hay comentarios:

Few days ago, we talked about how IFD's Hitman the Cobra & Mike Abbott have gained a cult status among French fandom. We saw some videos where the dialog, music & some scenes from Hitman the Cobra were spliced into some "cut & paste" short movies & even a cartoon video based on Mike Abbott's character. Today we go beyond those cut & paste video editions & we publish here ORIGINAL & NEW videos starred by French fans of IFD.

I got really happy & surprised how professional they are & how they know to re-shoot what Godfrey Ho did looong time ago. Indeed they have watched Hitman the Cobra more than a couple of times.

We start with the original video from IFD

And then, we have a group of avid fans!!!

This one is in my opinion the very best one. It runs 40 seconds only but it has the true spirit of IFD.

IFD filming style is still alive!!!! New filmakers know how to get to the public with fresh, easy-to-follow & interesting movies like Godfrey Ho, IFD & Filmark did during the video boom & the ninja craze more than 25 years ago.

Ed Glaser from Dark Maze productions are joining forces, in this new feature titled NINJA MISION FORCE, a movie Godfrey Ho would feel proud to direct, with Brad Jones, a well-known "guy with glasses".The very best video reviews about IFD movies I have ever enjoyed are the ones by Brad Jones from Cinema Snob. Ed & Brad style's & their humour are perfectly combined with IFD style. Brad was the one who brought Pierre Kirby to light.

We are looking forward to see more about NINJA THE MISSION FORCE!!!
Publicado por Jesus Manuel en 16:32 No hay comentarios:

Iam not talking nonsenses, important websites like www.nanarland.com dedicated some special posts, interviews & a lot of pages in its forum to this movie & the people involved on it. And the below video is a instant winner among people who likes IFD movies.

The original english dialog was hilarious but the French dubbing was even more & more hilarious & that's why this movie has got such status.

And even Mike Abbott has become into an animated character. I definetively love this this video & the passion these French guys devote to Hitman the Cobra.

You may watch it here but it would be better if you find an original copy!

This movie was starred by Stuart Smith who tried to hide himself as Stuart Steen as the hero. The late Louis Roth played the villain and the ninja action was choreographed by Donald Kong Do & Ex-Venom Sun Chien who plays a episodic role in the movie.
Publicado por Jesus Manuel en 9:14 No hay comentarios: