Patrick FrBezar in The Big Heat

Patrick FrBezar got his place in this blog in 2 different entries. He deserved its place & he deserved his name to be known because he was ( and he still is) one of the most enigmatic gweiloh player who has ever appeared on screen. You may see the entries dedicated to Mr Patrick FrBezar clicking HERE & HERE.

Patrick FrBezar was a regulat actor for Filmark where he usually played villain roles in movies like Ninja Force of Assassins or Twinkle Ninja Fantasy where he was the main villain ninja who wear an orange ninja outfit!...as usual his real name was mystery while he worked for Filmark or when he played bit roles in bigger HK productions where he was never credited. 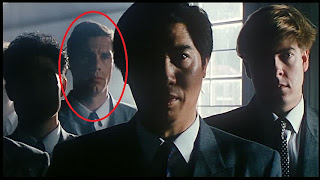 Once again, the one who put his name on the credits was Joseph Lai. But I don't want to re-write what I wrote about him again. Patrick FrBezar comes back to this blog because I am trying to write his full filmography & last Sunday when I was re-watching Andrew Kam / Johnnie To's The Big Heat, I was surprised to find him among the extras!...I had seen this movie several times but I didn't pay attention to Mr FrBezar's appareance till now.
Publicado por Jesus Manuel en 15:59